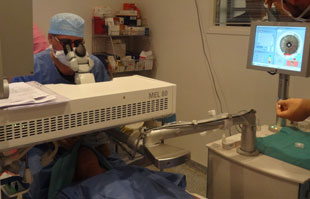 create a corneal flap with a first laser (Femtosecond) and treatment of the refractive anomaly with an Excimer laser. Very high myopia
Evolutive ametropia: the refraction must be stable
Be over 18 years (except in special cases of anisometropia)
There is no age limit. After 40 years-old, a possible combination treatment of presbyopia should be discussed and the lens transparency should be checked.
Existence of a cataract
Corneal anomalies: too thin, opacity, herpetic keratitis.
Keratoconus (depending on the thickness, a treatment in combination with a cross-linking should be discussed).
Severe dry eyes syndromes (the laser modifies for several months the lacrimal reflex due to the alteration of corneal nerves and can increase a tear deficit)
Progressive diseases: glaucoma, retinopathy
Strong amblyopia
Autoimmune diseases that can affect the healing process
Pregnancy

Before surgery, the patient undergoes a complete checkup that takes about 1 hour.

In case of corneal deformation due to contact lenses, a second measurement has to be made.

There are no dietary restrictions or medication before surgery.

You should only avoid coffee and alcohol.

Do not put makeup, perfume and cream on the day of surgery.

Your stay at the clinic will last approximately one hour.

Antibiotic eye drops should be instilled 24 hours before.

You will be installed in a lounge; we will provide you with a disposable suit to replace your clothes.

A surface anesthesia using eye drops will be made a few minutes before the laser. The patient lies on a bed beneath the microscope of the laser.

The laser is programmed according to measurements taken during the checkup.

Eyelids and eyes are cleaned and a sterile drape is placed around the eye.

The patient is guided by the surgeon at each stage.

To avoid closing the eye, a small retractor is placed.

The surface of the eye is rinsed to remove any particles.

A suction ring is placed over the eye.

The corneal flap is performed with the Femtosecond laser (25 “)

The vision returns after a slight darkness phase, the flap is lifted up.

The patient has to fix a flashing green dot.

It is not necessary to look precisely at the dot as the laser will automatically follow your eye (tracking system by infrared).

The Excimer laser is then activated and it usually lasts less than twenty seconds.

An odor due to the vaporization of the corneal tissu can be smelled.

There is no pain. The laser is a cold ultraviolet laser without thermal effect, so there is no burning.

The corneal flap is repositioned after cleaning and after interface control.

The eyelid retractor is then removed.

After a re-calibration of the laser, the second eye can be operated.

The patient stays in the laser room about 10 minutes per eye.

You will rest a few moments and then can go out without bandage using sunglasses.

Eye drops will be prescribed

After treatment, there is no pain. There may be a discomfort that disappears with a few drops of anti-inflammatory eye drops.

Sensitivity to light, so you are advised to wear sunglasses for 24 hours.

Red spots on the conjunctiva may appear due to the suction ring. They regress quickly.

Do not rub your eyes.

It is difficult to work the same day.

It is usually possible to drive the next day, but obviously the vision must be sufficient and without discomfort.

Most patients can work within 48 hours.

It is not advisable to swim for 1 week.

Eyes have to be protected under the shower; avoid getting water or shampoo in the eyes for 10 days.

It is best not to smoke because the smoke can irritate the eyes.

And avoid exposure to dust and wind.

Failure to follow these instructions may expose to infection or other complications that may compromise the quality of the final result.

The first day after surgery, the vision is clearer, and it improves the following days and for a few weeks.

The antibiotic eye drops should be continued for 7 days. Each patient heals at its own speed. Reaching the final result may take more time for certain patients.

For patients over 40 years, the vision may require glasses. Glare and halos at night may occur for a few weeks and regress more or less quickly, sometimes without disappearing for certain myopic patients.

When LASIK is not possible:
PRK (photo refractive keratectomy) may be possible: the same laser Excimer procedure, but on the surface, after removing the epithelium.